My brother, Dan, and his girlfriend, Nancy, took Emma to the beach yesterday. By the looks of it, Emma had a great time!

Emma has been spending time with Etta, her half sister and my brother’s dog. 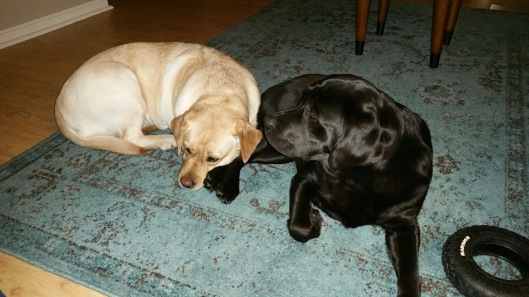 Hello, faithful readers! It is Day Six of my Thanksgiving visit to my dear friend, Jane’s, house in Southern Maryland. I have been enjoying my time with Jane and with darling daughter, who I picked up from Georgetown University on Tuesday evening. We have been working on a special project which is still not complete. I promise to share with you before I depart Maryland for Maine!

In the meantime, here is a sneak peek of an Annie Sloan Chalk Paint (ASCP) project I have undertaken this evening. I am in the process of transforming a petite cabinet from a white crackle finish to an ASCP Graphite paint job for Jane. The before photo:

The “in process” photo with one coat of ASCP: 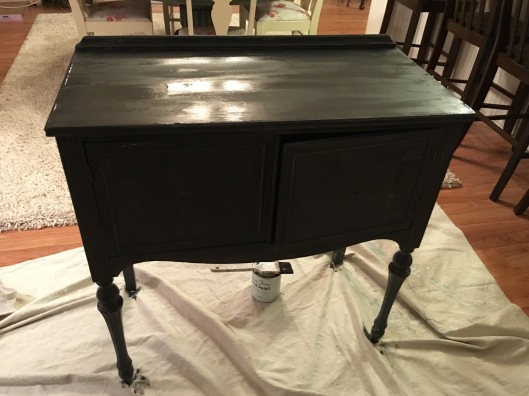 You can see the paint is still wet! My objective is to put a second coat of ASCP on before my head hits the pillow tonight. Wish me luck!

Hello, dear readers! I hope you all had a nice Thanksgiving filled with family, friends, food, and fun! We did! We had a lovely Thanksgiving feast with Jane, and her sister, Carol, yesterday. We also celebrated darling daughter’s birthday! Jane made her a beautiful birthday cake!

I wish you luck today if you are participating in Black Friday shopping. We are still working on the special project which will be the subject of a future blog post. Stay tuned!

I picked darling daughter up from Georgetown last night! We are staying at Jane’s house in St. Mary’s county, Maryland for the holiday. Jane is the hostess with the mostest! We have been working on a project which will be the subject of a future blog post. Meanwhile, check out the view from Jane’s dining room!

Tonight, I am spending the night in Braintree, MA with our beautiful yellow Labrador, Emma, at my brother, Dan’s and his girlfriend, Nancy’s house! Tomorrow I leave for Washington DC for the holiday to visit with darling daughter and my dear friend, Jane. Emma is going to stay here with Dan, Nancy, and their black Labrador, Etta, while I am away.

Darling daughter and I adopted Emma in July of this year from a breeder in northern Maine. She was a kennel dog and is still very fond of her crate! I have a crate both downstairs in the living room and upstairs in my bedroom at home for her comfort and convenience. Emma sleeps in her crate at night.

However, all this time I have wanted her to sleep in the bed with me! It has been a wish unfulfilled because Emma has never jumped up on any furniture, including the bed, at home. I have tried to coax her up with treats to no avail. So Dan’s mission this week while I am gone is to teach her to sleep on the bed.

I am excited to report we are off to a good start! Check this out!

We are three peas in a pod! That is Etta, Emma, and myself in Dan and Nancy’s guest bedroom! All on the bed! Woo hoo!

From my perspective, my two favorite dogs: 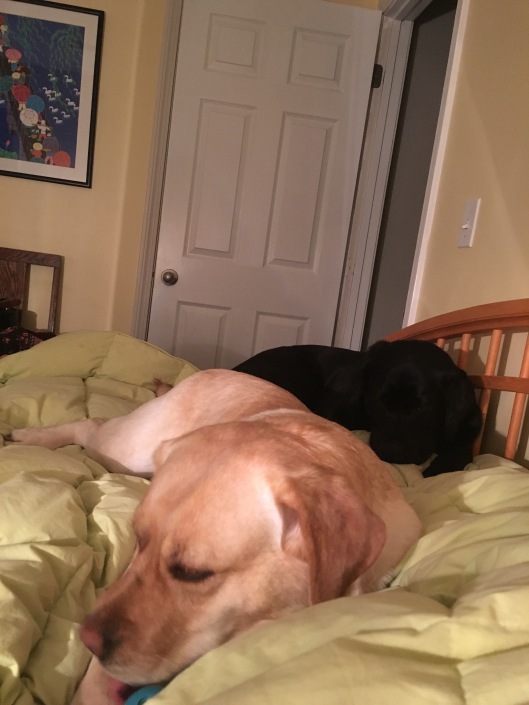 And here is my girl, relaxing, ON THE BED!!!

So this is a first! I am so excited Emma is snuggling with me ON THE BED! 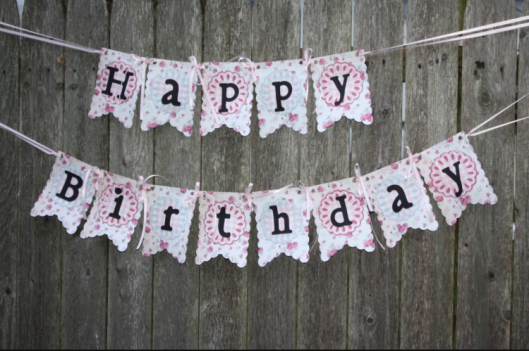 We will celebrate in person next week in Maryland!

Whew! The new GE appliances have been installed! Doug, our handyman from here on the island, finished this morning with the microwave installation. Doug is my new best friend!  Here are the results: 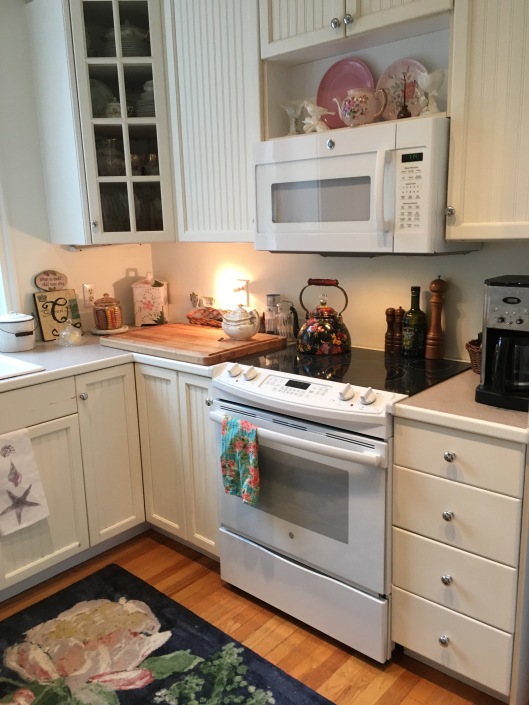 I also installed two new light switch covers in the kitchen and powder room! I feel so handy. The covers are MacKenzie Childs Parchment Check. They look like this:

MacKenzie Childs is having a big 50% off sale! I purchased these several weeks ago, marked down to $14 from $28. I checked the website earlier. Regrettably, these light switch covers are no longer available in the Parchment Check pattern. I am glad to have snagged them when I did!

That is all, folks!

So, in addition to visiting Pemaquid Point and Lighthouse yesterday, Emma and I did some more antique trolling through midcoast Maine. Emma is the best dog ever! She waits patiently for me whenever I stop to shop. She is such a good girl.

We made a stop on Bristol Road in Damariscotta at Damarine Antiques. It is a lovely place. We met the charming and helpful owners, Miriam and Daniel, and browsed through the interesting merchandise. I bought a pair of earrings for $12. Pretty!

And then I also bought a copy of a historical sign for $2. 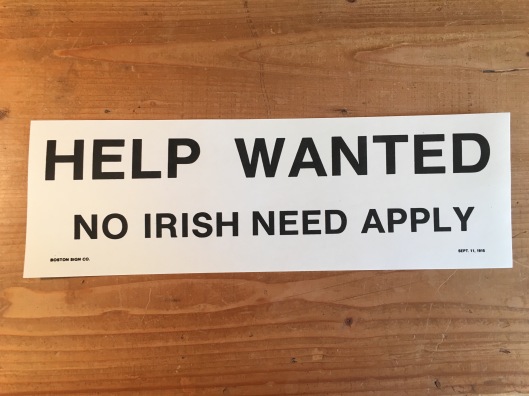 It is worth noting that I am of Irish heritage.

Bear with me. Generally, I keep my political musings to myself. I have never blogged about my political thoughts before today.

You see, in the 1860’s, the Irish were openly discriminated against in the United States of America. Americans considered the Irish to be inferior; to be some sort of human scourge to be avoided and shunned whenever possible. Hence, these NINA (No Irish Need Apply) signs appeared in shops, businesses, and newspaper advertisements during the 19th century. This is a vivid historical example of racism in America.

Americans, for the most part, don’t consider Irish immigrants or people of Irish heritage to be a problem. In fact, it is quite the opposite. In America, we actually celebrate the Irish on St. Patrick’s Day every March 17th with congenial parades, festive green beer, and tasty corned beef and cabbage.

However, 150 years later, some things have stayed the same.

As evidenced by the recent campaign run by our President-elect and his supporters, simply substitute Mexican or Muslim (or whatever group of people you don’t like for whatever reason) for Irish. Racism still exists. The targets have simply changed. The Irish are okay now. Heaven help you, though, if you happen to be Mexican or Muslim or belong to another targeted group, according to the President-elect and his supporters.

Racism makes me angry and sad.

Being of Irish descent, I am simply lucky to have been born one hundred years after these NINA signs first appeared. My ancestors suffered discrimination and experienced hatred based on where they came from. I have never experienced this sort of racism because time passed and now the Irish are okay according to mainstream America. This NINA sign serves as a reminder of the racism that existed towards the Irish in this country.

It makes me angry and sad that some Americans are unable to reject racism and hatred in this day and age and, further, that we have elected a racist president.

Look at the NINA sign again. Think back to what it must have been like to be Irish in America 150 years ago. Let the Irish serve as an example of a group that was demonized and dehumanized by racists in America.

Look at our headlines today. Consider how the President-elect and his supporters demonize and dehumanize Mexicans, Muslims, and others. Think about what it must be like to be Mexican or Muslim or to belong to another targeted group today.

Let’s empathize and stand with the targets of racism.

Let’s end racism in America by rejecting those who propagate hateful speech, ideas, and policies against any group based on their “otherness”. ﻿

Thank you for your reflection on and consideration of this issue. 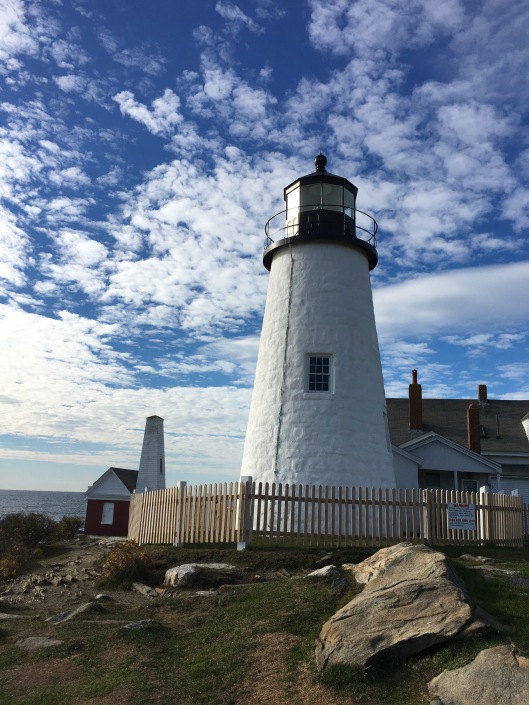 The lighthouse at Pemaquid Point. 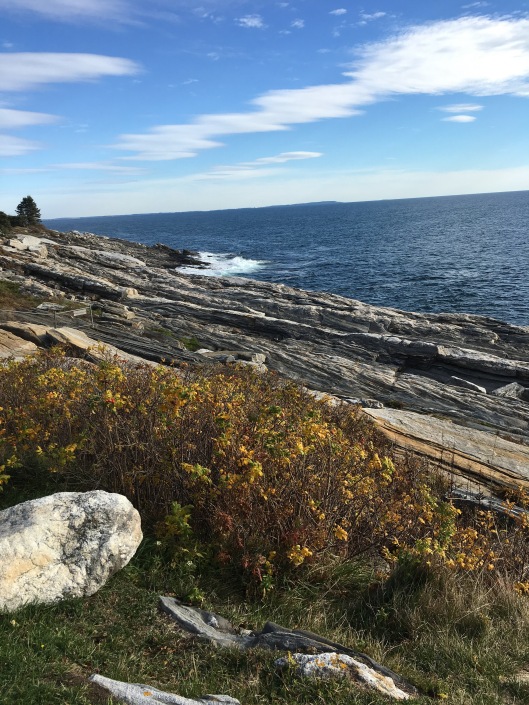 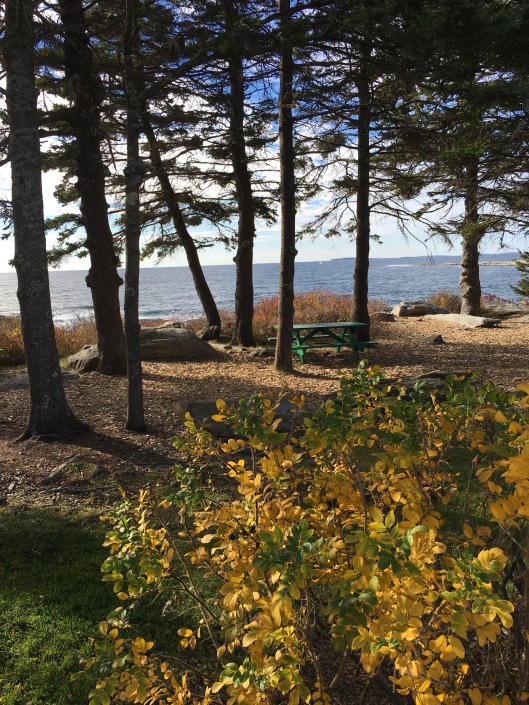 Emma, our English Labrador, likes to eat pumpkins! When Etta, my brother’s black Labrador was here two weeks ago, they shared one. Apparently, the breeder where both dogs came from has a pumpkin patch and she feeds her dogs pumpkin in the fall.